7 Common Social media Marketing Mistakes (And How to Fix Them)

It’s so powerful that I don’t need to introduce its benefits, because everyone already knows about them.

Unfortunately though, you will make mistakes. And those mistakes will be costly for your brand.

Fortunately, preventing them from happening is easy, and most of the time, it’s as simple as being aware of the mistakes you are making.

In this article, we’re looking at 5 Common Social media Marketing Mistakes (And How to Fix Them)

1. Not responding to comments

Every time I see brands on social media who aren’t responding to their audience’s comments, I drop a tear, because I know that they’re missing out on huge opportunities.

Many brands have a goal of getting their audience more engaged, which also includes more comments on their posts.

But if those comments aren’t answered, you can’t really expect people to continue engaging with your brand!

They might do it once, or even twice, but if they aren’t getting any response, it’s like talking to a wall. Chances are, they’ll stop commenting on your posts and might go to your competitor instead – where they’re treated with respect.

According to a study, 5 out of 6 messages to brands go unanswered, so there’s no doubt that there’s room for improvement among most brands.

Instead of seeing responding to comments as a burden, see it as a huge potential for you to build long-lasting relationships, trust, and to convert your audience into loyal supporters.

In fact, a study found that when companies engage and respond to customer service requests over social media, those customers end up spending 20% to 40% more with the company.

A big mistake you can commit is to invest too little resources in social media.

A common scenario is that you create your social media accounts, share a few posts, then don’t have enough time to manage them.

The result of this is that your accounts will soon become ghost towns that does more harm than good for your brand.

Social media marketing is a process, and it is something that you need to put consistent effort into in order to see any real results.

If you aren’t investing enough resources, you’ll never be able to reach your full potential.

This concerns both lack of time, and lack of skills.

If you believe that social media is something that the youngest in the team can take care of, you’re completely wrong.

Social media demands skill and knowledge. And to get those, you need education and practice. If you’re looking to build a social media team, make sure the people in that team have actually built something on social media, and that they know how to generate results.

When building your team, make sure that the team members have different skills so they can complement each other.

3. You’re only thinking about followers

Followers are an important part of social media marketing.

I cannot argue with that.

However, when marketers stop and only look at that single metric, many others tend to be forgotten.

There’s a reason that having a small and engaged following is far more beneficial for brands than to have loads of followers with an engagement that is close to non-existent.

If your followers aren’t engaged, they’ll never get impacted and influenced by you.

Don’t see followers as the end goal, even if follower count can be something to aim towards.

Instead, focus on other metrics that are far more valuable for your brand, such as engagement rate, loyal followers, number of people who thank you, and show appreciation for your product/service on social media.

The most valuable you can get is a customer telling you how your product has helped improve their life.

When you stop at the easiest and most accessible metric to measure your social media results; followers, it tends to result in ignoring every single other highly relevant statistic.

Just look at how many different statistics Instagram Insights offers.

These stats are there for a reason. 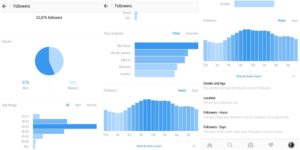 So you want to reach your target audience in a better way, and talk to them in your very own personal language?

Most of the time, for brands at least, use of slang and jargon is the most common form of language to better reach their audience

Just be careful, though.

Unfortunately, using the wrong language can end up harming your brand instead, so it’s important that you know what you get yourself into.

Most importantly, take a moment to reflect if your brand is in a position where slang and jargon will work well for you.

Skittles, for example, have built a culture and brand around being fun, exciting, and pure awesomeness. 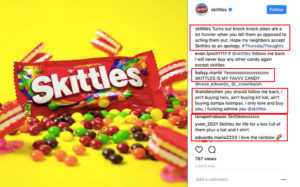 And their audience loves it. It resonates well with them.

And that’s a sign that Skittles know exactly who their target audience is.

Most importantly, because Skittles have built their very own culture, it doesn’t come off as inauthentic when they use the language they use. Because frankly, they’ve always done so.

However, on the other hand, when brands use a language on social media that doesn’t align with their values, or if they start doing it all of a sudden, the audience often gets angry.

In fact, a study by SproutSocial found that 38.4% of customers find it annoying when brands use slang or jargon that isn’t suitable for their brand. 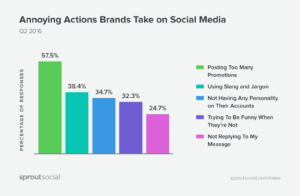 Lesson is: don’t use slang that doesn’t reflect your brand’s values and comes off as inauthentic.

You might be doing it to come closer to your audience by using a similar language as they are using.

But the truth is that all you’re doing is pushing them away from you if you don’t know how to use it properly.

If you aren’t measuring results, you’re missing out on valuable information that can help you generate even better results than you’re seeing right now.

I’ve already touched briefly on using follower count as a result-measuring metric, as well as Instagram insights, but there’s more to social media results than that.

In fact, most of the results you’re seeing on social media isn’t directly measurable, nor will it benefit your brand short-term.

Measuring results on social media is vital for future improvements.

6. Automated posting across all your platforms

On most social platforms, you have the ability to connect with some of your other social media platforms. 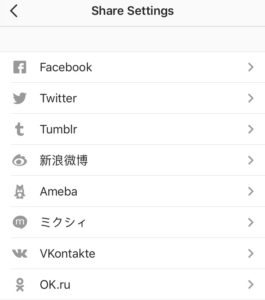 What connected accounts lets you do is instantly share the same post across the social platforms you select.

In short, the post you share on a social platform can be shared on several of your other social accounts – all at the same time.

Here’s why that can be a bad thing:

When you select “Share on __” as well as the platform you’re already posting on, you’re essentially posting the same post on all your social platforms.

Can you guess why that’s a bad thing?

They’ll get access to the exact same content by following you on one platform instead of 3 or even 4.

What will this lead to?

While it means more work, it means greater results, and more followers on all your social channels.

Some might ignore comments due to lack of resources, others might do it because they think it makes the situation better.

Unfortunately for them, that couldn’t be more false.

Kristin Smaby said in “Being Human is Good Business”, the following:

“When customers share their story, they’re not just sharing pain points. They’re actually teaching you how to make your product, service, and business better. Your customer service organization should be designed to efficiently communicate those issues.”

For every customer who bothers to complain, 26 other customers remain silent.

This just shows that social listening is tremendously important. If someone is experiencing a problem and take it to social media to let you know, chances are, there are plenty of more people who have experienced the same problem.

They just haven’t said anything.

On the bright side, if you succeed in solving your customer’s complaints, the majority will do business again.

Also, if you resolve a complaint in the customer’s favor, they will do business with you again 70% of the time.

United Airlines receives a ton of complaints on their Instagram page, but have a hard time responding to them. This results in more angry comments, and eventually a lost customer due to failure of solving their problem.

You have to watch every single steps to avoid making any mistakes or falling into any traps.

But the use of social media shouldn’t feel impossible and scary. Instead, it should be fun!

By being aware of some of the most common mistakes on social media, and why they are harmful, you’ll avoid committing them, and stay out of trouble that is limiting your success.

Have you committed any social media mistakes?