Influencer marketing can generate tremendous marketing results for your brand. Just look at the statistics that prove it.

Creating a successful influencer campaign is easier said than done, and with too little knowledge, influencer marketing is like a minefield where you either step on a mine and fail, or can breathe out because you didn’t get blown into pieces.

These points will ultimately help you generate better results with your campaigns, and get more bang for your marketing budget.

According to me, this is the single most important thing to running a successful influencer marketing campaign, so inevitably, I put it as number one.

The influencer you choose to partner with will have the biggest impact on if your campaign is successful or a complete fiasco, and together with several other factors, it makes up a complete, successful influencer campaign.

A “good influencer” is so much more than a person that has a lot of followers on social media. The number of followers an influencer had was almost the only metric brands and marketers looked at when they were trying to identify influencers to partner with back in the days. and when they found an influencer that matched their follower preference, they partnered with them.

Today, the influencer marketing landscape looks a lot differently (thankfully), and now, follower count is one of the least relevant metrics to look at. The problem is that brands and marketers still to this day believe that follower count is all that matters, but that is far from the truth.

Today, anyone can start a profile, upload some pictures, and buy some followers and make themselves look like influencers, but will they have any influence over people? And will people look up to them?

No and no. This results in nothing else than non-existing results for your brand, and a complete waste of time and money.

Marketers need to understand that there are far more metrics and factors they need to look at and consider before you can go ahead and work with them. At least if you are looking to generate the best possible results.

Sportsway.dk is a brand that looks for influencers within its niche and its geographical area, and therefore only finds relevant influencers tailored for their brand.

After a campaign is done, many brands call the campaign over and go on working on the next campaign. When running a campaign, the influencer is usually creating content, and that content actually holds a lot of marketing power, and you’re missing out on great opportunities if you aren’t using it for your own social media content strategy. 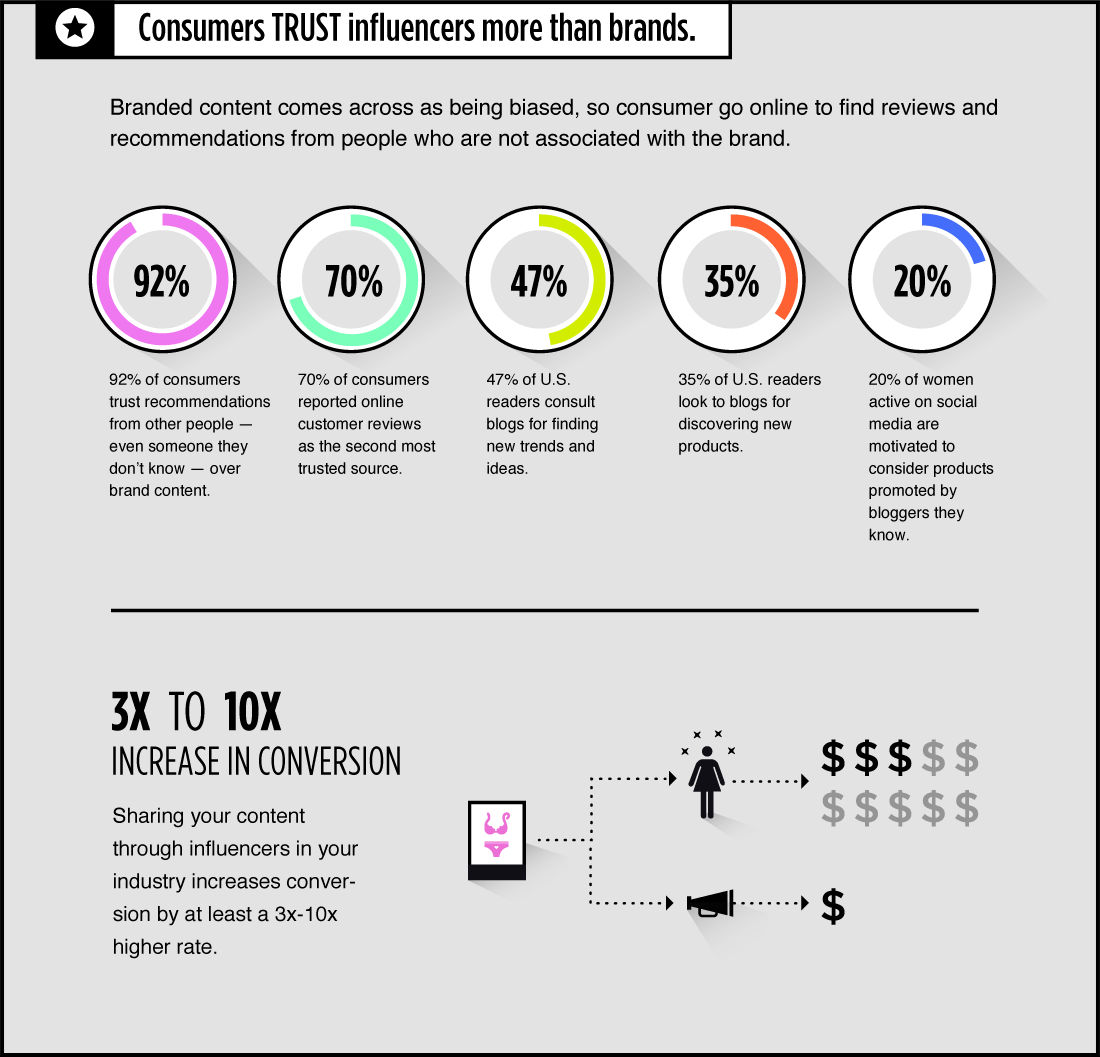 Did you know that user-generated content is 20% more influential than any other type of media when it comes to influencing Millennial purchases? And that’s just one of many powerful statistics that talk about the efficiency of influence content. And when you think about it, it’s not strange at all. People trust the words of the influencer, and when people see that you’ve shared a picture of them using your products, some of that trust will be transferred to you!

Influencers are normally amazing at creating original and appealing content, and you don’t want to let it go to waste.

You know how response to the message: Because you’ve already created an influencer campaign, you know how people responded to it. If people responded poorly, then maybe you should think a second time about using that content, because the truth might just be that the content was terrible.

One trend you might have seen is the ugly Christmas sweater. During Christmas, people put on their ugly sweaters and share photos of it on social media. The brands that make these sweaters have found that working with influencers gains a lot of traction as it gives them a lot of exposure in time for Christmas, and almost creates a new trend during this time of year.

3. Give something to the influencer

Almost 100% of the time (with a few exceptions), the influencer will want something from you if they are going to recommend and endorse your brand to their audience.

Also, when you give something, you show them that they are actually valuable to you. Sure, some people have no interest in money, but the money can be a reflection of how valuable you think they are, and how much you appreciate them.

There are many different ways a campaign can be set up, and it’s important that you choose 0ne that is suitable for your own brand’s needs and objectives. Some influencers might just settle with product samples from you, and others want cold hard cash.

But almost every time, you have to give them something. If you expect to do a partnership with an influencer for free, you can just wave goodbye to them, because they’ll say no almost every single time.

You can’t take without giving. It’s pure logic. That way, they will feel like they are being used – because they are!

When working with any aspect of social media marketing, having a strategy that tells you what you should do, is very helpful.

You can make your strategy as detailed or shallow as you want, but the more thorough you make it, the more helpful it will be when you stand in front of decisions on what to do and choices on what to choose.

Here are the foundation pillars to creating a great strategy:

When you have your strategy, you have a map on how you need to execute to achieve your goal. Without a clear map of how you’re going to get to your final destination, it will be difficult to do so. It might not be impossible, but you will most likely make some detours on the way, and it will take an overall longer time. You will also end up generating worse results than you otherwise could have with a little planning.

Invest the time it takes to create an influencer strategy because you’ll get it back tenfold when you start with your influencer efforts anyway.

1. Don’t try to be in charge and decide everything

A big mistake brands make when partnering with influencers is trying to decide everything. They are trying to decide how the influencer should create the photo, what they should write in the caption, and when they are going to post. The big issue is that it doesn’t allow for the ultimate results.

The answer is quite obvious.

I always say, give the influencer creative freedom, but always review the content, and this is something you should follow as well. 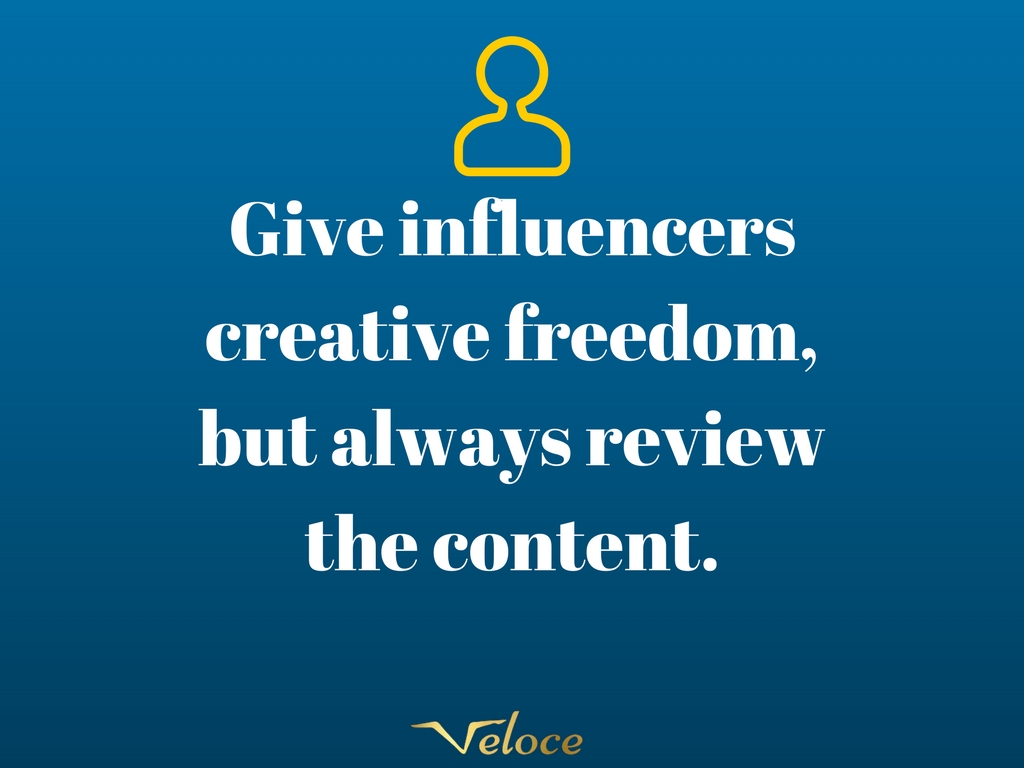 Now, giving the influencer some advice in how you want the campaign to look like doesn’t hurt, because that way, the influencer can try to optimize the campaign so that it fits your preferences, while also matching their audience and what they like.

The bottom line is that the influencers know best what their audience will find most appealing and thus give you the best results, so don’t pretend like you know the most.

No, the more followers the influencer has, the better it won’t be. In fact, there’s a huge reason to why more followers aren’t better, and let me explain it.

As an influencer’s follower count increases on a  social media platform, the engagement rate decrease. This tends to be a natural result. This means that an account with fewer followers but with a more engaged audience can generate greater marketing results compared to the influencer with a large following. 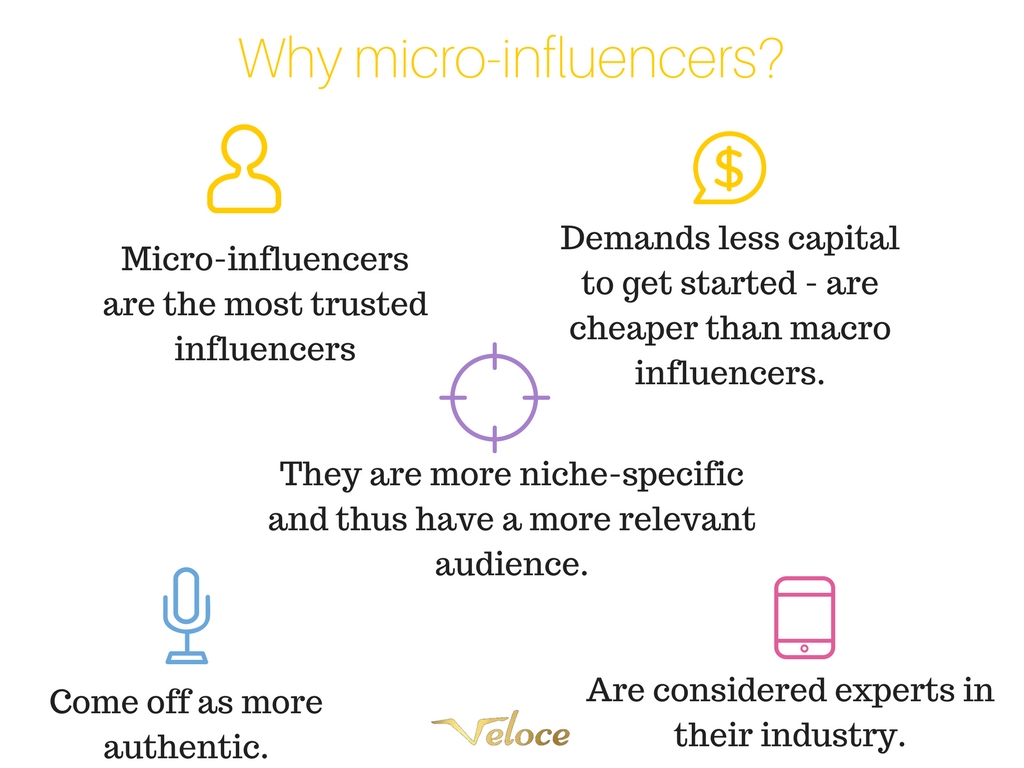 Secondly, influencers normally base their rates on their follower count, and as explained, more followers aren’t always better. This means that influencers can have a larger following, but still have a less engaged audience, yet still charge brands more for a partnership than influencers with a more engaged audience that can generate better results for a fraction of the cost.

This is the main reason to why micro-influencers are so powerful. They have a highly engaged audience that is genuinely passionate and interested in the niche the influencer is in, and they have a strong relationship with the influencer that they look up to.

Also, the statistics regarding micro-influencers aren’t too bad either:

Because micro-influencers have a smaller following, they are normally a lot cheaper than the big players. Sometimes, they will satisfy with a product from you if they genuinely like them.

What this means is that a compared to the cost of partnering with one large influencer, you can take that money and partner with several micro-influencers and results that you would never have a chance of reaching if you would have partnered with only one. Plus, you’re spreading the risk if it shows that one influencer might have faked their influence or for some other reasons generate bad results.

You’ve probably seen that from the incredible influencer marketing statistics.

But the thing is that no-one is an expert from the beginning.

If you’re running your first, second, third, or even 10th influencer campaign, you can’t expect to be an expert in influencer marketing.

This means that you probably won’t be able to drive the best results possible.

That’s like expecting to be as quick as Michael Phelps at swimming after swimming 5 times.

Be aware of the fact that influencer marketing can generate amazing results, but don’t expect the same results as the influencer statistics are showing – at least not right away.

You cannot use influencer marketing and not know how to use it properly, then blame that it doesn’t work.

If you’re partnering with influencers, you don’t want to be forgetting about influencer traffic.

Let’s say you’re having an influencer promote you on social media. Then don’t only ask them to tag you in their post to help you get more followers, but also ask them to link to your website.

What’s even better is if you partner with a blogging influencer that has their own blog.

Because when they link to your on their website, you’ll be able to improve your SEO.

In fact, one of Google’s most important ranking factors is backlinks – other website linking back to your site.

And the more authoritative and established the websites that link to you are, the more they’ll improve your website ranking.

The good news is that influencer’s blogs often are authoritative, so when they link to you, they aren’t only increasing brand awareness and making people aware of your brand, but they’re also helping you rank better on Google, thus gaining you more traffic and more potential customers that way.

What I mean by this is that when marketers evaluate the results of an influencer campaign and measure the results, they tend to neglect many different metrics where results were generated from the campaign. But the problem is that if you are not aware of it, and you are not measuring it, you won’t be able to credit the influencer marketing campaign for it. As a result, you will have a skewed idea of what influencer marketing is able to do in terms of marketing results.