While some people are starting to speculate in how long Twitter has left to live, there’s no doubt the platform can help you achieve great results, even if the statistics aren’t quite as good as some of the dominating platforms.

However, to those who are waiting for the fall of Twitter, I say that Twitter has many years left, and as a marketer or brand, you should definitely take advantage of what it has to offer and definitely not ignore it.

Whether you’re a brand or a regular person the first step to getting great marketing success from Twitter is growing a strong presence on the platform.

That’s why, in this article, we’ll teach you How to Grow social media presence on Twitter.

When you grow your social presence on Twitter, you don’t want to go about building your presence across every single channel on Twitter. Instead, you want to target those who really matter, in other words, those who are in your target audience and niche, because these are the ones who are most likely to be interested in your page once they find it. Because just because you let people find your page, it doesn’t automatically make them followers and supporters of your page.

A Twitter chat is an open public conversation that circulates around a unique hashtag. When everyone implements the unique hashtag in their Tweet, they join the conversation and can easily be found in the hashtags by people who are talking about the same subject.

The unique hashtag lets you follow and participate in the chat, spreading awareness about your page to relevant people.

There are two main benefits of joining Twitter chats. First off, they are often very niche-specific, meaning that different niches have different hashtags where the chats take place. This lets you easily find your target audience and engage with them, building your presence among people who actually matter to you.

Secondly, because people are actively searching the hashtag that is subject to discussion in a niche they’re interested in, you make it easy for them to find you.

2. Track people in your niche

People in your niche has already gathered the people who you want to target around their page. Why not take advantage of that and try to get them to start following you as well?

If you are visiting a Twitter profile of someone who are in the same niche as you, there’s a big chance that the people you find in the lists mentioned above are interested in what that account is sharing, and ultimately might be interested in what you are posting as well.

However, finding the accounts is only half the battle.

Once you have found the people you want to target, you want them to find your account. Start to follow them, interact with them, retweet their Tweets and so on.

If you’re engaging with them, don’t make the mistake of leaving meaningful messages or comments like “nice” or “awesome” because if you do so, you’ll just be one among many others and you won’t be unique. Ask engaging questions, ask to hear their opinion or write a message that will be the start of a valuable conversation, because only then will you be able to make them loyal supporters of you.

Interacting with your community on Twitter isn’t just a great way to grow your audience, it often leads to stickier followers.

When you add hashtags in your account description, it will appear in search. When doing so, make sure you are adding hashtags that are relevant to your niche so that people who will be genuinely interested in your account can find you and follow you.

4. Use hashtags in your Tweets

Hashtags are a great way to reach more people with your content on Twitter. Implement a few relevant hashtag in your Tweet and you can be sure to get a bigger reach.

If you share Tweets without hashtags, the only people who will read your Tweets are the ones who already follow you, except if someone retweets it, or find the Tweet through your profile.

Implementing hashtags will drastically increase the number of non-followers who read your tweets, and this is key to further growth because obviously, those who are following you can’t follow you a second time. Even though these work extremely well, you should generally limit yourself to using only 1 or 2 hashtags to each post, because excessive tags are annoying and a turn-off for most users.

Even though hashtags work extremely well, you should limit yourself to using only 1 or 2 hashtags to each post, because excessive tags are annoying and a turn-off for most users.

It might seem stupid, and because you’ve now heard of all the benefits of hashtags, you might be thinking “ahh nice, I’ll just fill my whole Tweet with tags”, however excessive tags are considered to be very annoying and are turn-off for most users, which means using a lot of hashtags might backfire and do the opposite instead.

The key to any social media success is staying active.

As a person or brand, you can’t live without it. Consistency and activity are the nourishments of your account, and if you don’t give those two things to it, the harvest and results will be very poor.

If you aren’t remaining active, people will quickly forget about you and move to someone else. And if you’re a brand, your competitors. During the days you’re busy with other work and can’t spend your precious time tweeting, using a scheduling tool like Hypefury can save you a lot of time and will increase your engagement rate and get more followers on twitter at the same time.

The absolute minimum to post on any social media platform is once a day. This is something that all marketers and experts have been able to agree on. Of course, there are some exceptions, however, have the everyday rule in mind when thinking about how often you should post.

A study by Socialbakers found that the engagement decreases after the third tweet on Twitter, so sticking to a maximum of two tweets a day is a good idea. 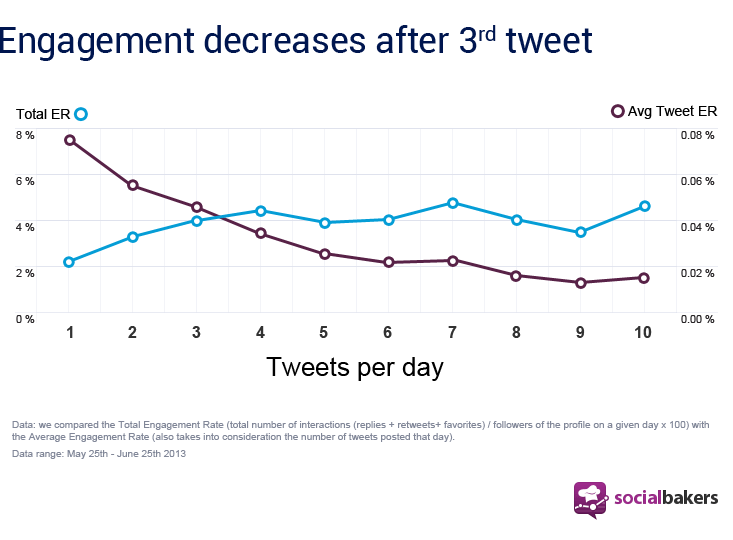