How To Tell When Someone Buys Followers On Instagram

Buying followers on Instagram has become quite a big deal on Instagram, which in some ways is quite sad because it’s not a good thing. Buying fake followers can seriously harm your account and since it is not allowed by Instagram, you can get banned for it.

Now, you might have seen a friend go from 100 followers to several thousand in just a day or maybe a celebrity go from a million followers to only 500K. Usually, these kind of events have something to do with bought fake followers.

But how can you tell if someone buys fake followers on Instagram?  There isn’t a definite answer to that question but there’ s still a few tricks and tips that can help you spot the “fakers”.

In this article, we’ll, therefore, present you with the tips to spotting the accounts who buys followers.

The engagement rate is one of the easiest and best ways to spot if someone buys followers.

If they have bought fake followers, you will notice their engagement rate is well below the average (1–3%), or even non existent. The reason is that the followers are generated autonomously and do not interact with the person they follow.

The engagement is first and foremost the like rate vs followers rate. Take a look at their post, make an estimation of their average likes per post and then divide that with their follower amount. This should give you a fairly accurate result.

Instagram makes this a bit more difficult to see due to the power of hashtags, but if an account was grown inorganically, then you can almost feel the ghost-like atmosphere on their content.

Many services that provide the fake followers are also selling comments and likes. This makes it more difficult to see if an account has bought followers but there’s still a way around it. Bot comments are comments that have been pre-written and them mass-posted without any base on the actual content.

Bot-comments are fairly easy to spot because they’re not saying anything about the actual post. Bot comments often include phrases such as “nice pic” or “love your account”. In short, bot comments aren’t comments that engage with the actual content they’re commenting on. They’re only general kind words. 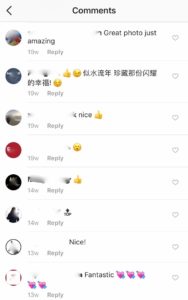 Because bots are commenting on an endless amount of posts, it is common that the comments get posted in a completely wrong context which makes it super easy to spot the fake comments and ultimately fake followers.

There are many programs that allow you to investigate the history of an Instagram’s account. One of the most used is Socialblade. Here, you can see the history of an Instagram account for example how many followers they gained on a specific day or how many posts they made. Take a look: are there huge spikes in their follower’s count? If this is the case, they might’ve bought fake followers.

While there is no actual feature within the Instagram app to tell if someone buys fake followers, there are other ways you can expose them.
One way us by looking at their interactions. Are their followers interacting with the user’s post? Is there any engagement?
The moral of the story, create an organic following. True followers and fans are worth infinitely more than fake ones that don’t actually care about your account.