It can take you months, even years to build up a solid following on your social media accounts.

And then, you lose them all in a heartbeat over some misunderstanding or some unfair characterization.

But though it might not be fair, it still remains true.

It is far easier to lose people than to gain them. For that reason, it’s important to understand the correct ways to interact with your audience. In that way, you can avoid such pitfalls that have them deserting you en mass – and hopefully grow your audience even faster while you’re at it!

Take the time to respond to people

The very first thing people expect when they’re interacting with you on social media is that you respond to them. It isn’t really that strange. If you send a message to somebody, you expect them to give you some kind of recognition for going through the effort. And so your audience expects the same. The same principle goes for when you’re talking to someone in real life.

There are a number of big reasons that responding to people is important.

The power of questions

When somebody does leave a comment, don’t just say, ‘thank you’ or explain your own experiences. Instead, go a step further by asking a question regarding something they said, or something you said, or some combination of the two.

The great thing about questions is that you’re going further than acknowledging them, you’re also hitting the ball back into their court and giving them the opportunity to engage with you further.

If you can get a few back and forth running with the people out there then even if you only have a handful of people talking with you, to others it looks like you’ve got an incredibly active and participatory audience. That, in turn, will create a norm and make them far more likely to engage as well.

When people attack you, the very first thing that you’ll want to do is defend yourself. Often, that’s not a very good idea. It’s very hard to come across as reasonable when you’re telling somebody they’re wrong about their opinions.

What they will see is somebody who is clearly upset and then your clear refusal to apologize and instead go on the offensive. That often does not come across very convincingly – especially as your words are easily misinterpreted when read.

A much better response is to say “we hear you, and we’re sorry” and try to calm the other person down. Then the rest of your audience will see one person who is irate and another who remains calm and composed.

The best part? The more unreasonable the first person was in their attack, the better off you end up looking for keeping your composure!

The golden rule when you’re responding on social media to somebody is: Never respond when you’re very emotional. These messages should always be saved as drafts and then re-considered either by somebody else or sometime later.

If you’re going out there and talking like an empty shirt, you can be pretty sure nobody is going to be interested. This is social media! It has its own rules and ideas – and one of those is that you use emojis to communicate.

So go ahead. Try them out. There are a lot of different kinds and though you don’t immediately have to go for the smiling dog poo, throwing in a wave or a thumbs-up every so often isn’t going to hurt anybody. 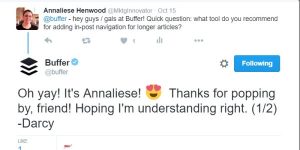 As an added bonus, once you get in the habit of using emojis here and there, you’re going to find that they can serve to communicate succinct emotions quickly and effectively.

Another great addition to your social media, to keep things interesting for your audience is to use both GIFs and videos to get your message across. The great thing about using GIFs and videos – provided you use them well – is that by doing so you can communicate more effectively, add in a bit of humor to what you’re trying to say and mix things up.

Of course, you should probably check your GIFs. Some may come from un-savory sources or movies you don’t really want to be associated with. Perhaps have a list of GIFs that have been checked and decided to be safe.

Have multiple people? Then you need a playbook

Businesses will often have multiple people managing social media accounts. Perhaps some people manage some accounts and other people manage others. Perhaps everybody manages accounts at different times. Whatever the reason, when you work this way you have to make sure that you have a clear way that you all respond to messages and a playbook of options.

The best is probably to have a set of pre-written responses, which you can all vary slightly to fit the messages that you’re getting in. In this way, you can be pretty sure that the tone and the way that you’re interacting with your audience remains similar across the different people responding to people across your different social media platforms.

There are lots of possibilities to make mistakes on social media, but at least if you follow these rules you’ll manage to protect yourself from most of them. For the rest, it’s just a lot of common sense. Stay away from your social media when you’re tired, drunk or in some other way not at the top of your game. Don’t engage in shouting matches. And stay professional.

Do things like that and you’re well on your way to at least not losing whatever new people you’re gaining. Following the rest of the ideas that I mentioned here will boost how quickly you gather them. Altogether, that will make for a more effective social media campaign.

Jessica Fender, pro digital marketer and head of content at OnlineWritersRating.com, a writing companies reviews website. She is very passionate about the fresh tactics in social media marketing and SEO.