The top accounts on Instagram have quite the follower count. While some are struggling to reach 100K followers, others are growing that number each day.

Not quite the surprise, right? 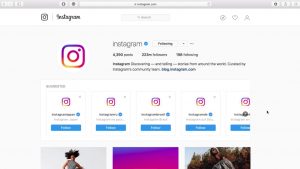 They built the platform and they have full power over it. If they wanted, they could make everyone follow them by default and give them no option to unfollow them. However, that would make Instagram look like a dictator.

Al top three accounts are from the USA, and the accounts in second and third place both belong to females who are musicians and actresses. While there doesn’t have to be a correlation, it could potentially indicate what type of celebrities have the biggest interest from the public.

On the fourth place, we have the first male on the list of the top 10 most-followed accounts on Instagram. Cristiano Ronaldo is one of the most famous football players in the world, and that can be reflected in the number of followers he has on Instagram.

Instagram currently holds the place as the fifth most followed account and person on Instagram. What’s more, Beyoncé also holds the current record of the most liked photo on Instagram which is her pregnancy announcement. Her post has been able to accumulate over 11 million likes

We would like to share our love and happiness. We have been blessed two times over. We are incredibly grateful that our family will be growing by two, and we thank you for your well wishes. – The Carters

In 2015, Swift was the most followed account on Instagram, but as you can see, a lot has changed since then. This is proof that the list of the top 10 accounts will not look like this forever. Chances are that they only look like this for a short period of time.

Following closely behind her sister is Kylie Jenner in 8th place. Kylie is regularly sharing posts on Instagram – both daring bikini pictures and stylish outfits.

The rock is an actor and professional wrestler. On his Instagram, he shares motivational videos where he brings his audience behind the scenes and into his life.

In 2014, Justin Bieber was the most followed account on Instagram, but in 2014, Instagram ran the “purge” which removed all the fake accounts on the platform, making people (including celebrities) lose a ton of followers. But some more than others. After the purge, Kim Kardashian, who lost fewer followers than Bieber, stepped in and grabbed second place.

What is interesting to see is that all accounts (except one) are accounts belonging to celebrity personalities. There are no accounts in the top 10 that belongs to someone who has built their fame on social media like an influencer.

For the people on this list, it has been the other way around where they have first built their fame and then hopped on different social media platforms – having their fans following closely behind.