Are you curious about what happens when you remove someone on Snapchat?

When you remove someone on Snapchat, a lot of things happen. If you thought that all that happened was that they were removed from your friends list, think again.

By the way, check out this post on how to grow your followers on Snapchat.

How to remove someone on Snapchat

(How to unfriend someone on Snapchat)

How to block someone on Snapchat

When you block someone on Snapchat Can they still see the messages?

No. If you send a message to someone and after that you blocked them then the message sent by you will disappear and the user will never receive that message. This is under the condition that they have not opened the message/snap yet.

If you block someone and have saved messages inside the chat, these messages will disappear as well.

What happens if you unblock someone on Snapchat?

The answer is quite simple. It goes back to what it was before you blocked them. Except, of course, you will not be friends any longer if you were friends before you decided to block them.

If you want to know how to unblock someone, this is how.

If you just unblock them, they will also be unable to contact you in any way from their account

How do you tell if someone blocked you from seeing their story on Snapchat?

Snapchat came with an update a while ago that allows you to block certain users from watching your Snapchat story. This means that you can hide your story from users even if they are still your friends.

Seeing if someone blocked you from seeing their story on Snapchat is actually quite tricky. The only way you can find out is to look at their phone or use someone else’s Snapchat that has not been hidden or blocked. If you can see that they have posted Stories, but you don’t have access to it, it means that you have been blocked from seeing their Stories.

What happens when you delete someone on Snapchat?

When you delete someone on Snapchat, a number of things happen. It’s not just that they disappear from your friends list and that’s it.

Here’s what happens when you delete someone on Snapchat:

Can I see the snaps someone sent me during the time we weren’t friends if I deleted them but re-added them?

Yes, actually you can! When you re-add a user you have deleted, you will be able to see the snaps they sent you during the time that they were deleted.

Will they be able to see my Snapchat Story when I delete them?

It depends! On Snapchat, there’s a feature which allows you to decide who gets to see your Stories and who doesn’t.

To access your Stories settings, go to the Stories page and select who can see your Story.

When choosing who gets to see your Story, you can choose between the following 3 Story settings: 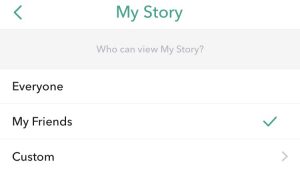 If you want to have your Story settings to ”Everyone” but doesn’t want the person you remove to be able to see your Stories, you have to block them.

Will they receive a notification when I remove them on Snapchat?

When you remove a friend on Snapchat, they won’t be notified about it.

If I delete someone on Snapchat am I still on their list?

Yes. If you delete someone from your friends list, you will still be on theirs unless they remove you as well.

Can you add someone on Snapchat without them knowing?

No. Users are always notified when you add them on Snapchat, unlike if you delete them. When you add someone on Snapchat, they will get a notification that you have added them.

If you delete someone on Snapchat can you add them back?

Can someone see a pending Snapchat?

Pending snaps are, as mentioned when the snap has not reached the recipient for various reasons.

You may particularly wonder about this if you’ve been friends with someone on Snapchat and were sending snaps to each other before, but recently it says pending when sending a snap. If this is the case, it could mean that they have deleted you.

Can you delete a pending Snapchat?

If you have sent a snap to someone who you aren’t friends with, it will usually say pending.

But if you want to delete a pending Snap, it is actually possible, as long as it has not been opened.

To delete a sent message, simply press and hold on the snap you‘d like to remove of and a pop-up will appear asking if you‘d like to delete.

Can you send a message on Snapchat if you are not friends?

The question is if it is possible to send snaps to someone on Snapchat, even though you are not friends. The answer is that they will be able to view your snaps immediately if their privacy settings are set to receive Snapchats from “Everyone“. If their privacy settings are set to standard (which most people have), your snap will appear in your message list as “Pending” until they add you back.

Can you snap someone who deleted you?

The answer to this question is the same as the answer above, because the status of your Snapchat relationship will be the same. The only time it will be different is if they have blocked you.

Will they know if I delete them as a friend on Snapchat?

Yes, they will know if you have deleted them, and removed them from your friend’s list on Snapchat. In every Snapchat user’s profile, there is a list of “Snapchatters who have added you back”. If they check the list and you are not in there, they’ll be able to understand that they’ve been removed as a friend. Also, using the other methods to know if someone deleted them on Snapchat, they will be able to understand that they have been removed.

However, when you delete someone as a friend on Snapchat, they won’t get a notification, so if they don’t look too closely, they may not notice that you have removed them. It is mainly by actively checking if you have deleted them (probably after assuming you have done so) that they can find out, because not everyone knows about the methods that I mentioned above.

If I re-add someone on Snapchat will they know?

If you delete someone on Snapchat, they won’t get a notification. The catch is that when you re-add them, they will get a notification, just they do when anyone adds them on the app. And if they can remember that you previously became friends, but now, they get the notification again, they might be able to understand that you deleted them.

How do you tell if someone didn’t add you back on Snapchat?

One way is to check their Snapchat score:

Can you tell if someone has declined your friend request on Snapchat?

Yes you can, and the ways you see this are much like the methods mentioned.

Some ways that you can tell that they have declined your friend request on Snapchat are:

How do I delete a friend request on Snapchat?

It is possible to delete a friend request on Snapchat. If you have requested to become friends with someone and want to delete this request, simply find their profile and tap on the add button again. This will remove the request.

If you are the one who has gotten the request from someone, the only way to remove the request is to block them.

If someone deleted me from Snapchat, why is are they in my contacts?

If someone has deleted you on Snapchat from their friends list, you will be removed from their list, but you will still see them in your list until you remove them from yours.

If I delete someone on Snapchat will they be notified?

No, people only get a notification when you add them, not when you delete them.

If I delete someone on Snapchat and then re-add them, will they be notified?

Yes, when you add someone, they get a notification that you have added them.

If you remove someone on Snapchat, will they still see the messages sent before you deleted them?

Yes, if you remove someone, they’ll still have access to the messages and images inside your chat as long as they are saved. Messages can be saved by you or them. This question brings us to the next question:

Does removing a friend on Snapchat delete saved messages?

If you remove someone on Snapchat, will you be able to see saved messages if you add them again?

Yes, you will still be able to see saved messages. You will also be able to see saved messages when you unfriend them. This goes for even if you both unfriend each other. However, if you are the one who has saved them messages inside the chat, you can simply unsave them (by tapping and holding each message) and they will disappear. If they are the one who have saved the message, you can, however, not remove it.

What happens when I delete someone who is in the same group as me?

If you delete someone on Snapchat who is in the same Snapchat group as you, not much will happen. You will be able to see their snaps and they will be able to see your snaps in that group. However, when you send private snaps to only them, you will have to become friends first in order for the snap to reach them (or vice versa).

What does the GREY arrow mean on Snapchat?

The arrow is a symbol that is shown when you send a snap to someone, showing that it has been sent.

Will I lose my streak if I unfriend someone?

If you unfriend someone on Snapchat that you have a streak with, the streak is lost. You will not be able to get the streak back if you add each other again.

Basically, what this question refers to is that if you remove the Snapchat app, will you lose your streaks?

The answer is no.

How to Know if Someone Deleted You on Snapchat

If you suspect that someone has deleted you on Snapchat, you might be curious to find out.

There are a number of methods you can go about checking if someone deleted you on Snapchat, and if several of them give indications that they have deleted you, you can be quite sure.

If the snap you sent them just say ”pending” or doesn’t reach them, or if the arrow next to their username appears gray, it’s an indication that they may have deleted you. The status of your snap appears below the person’s username on the Chat screen.

Tap and hold their username. Doing this will reveal their profile information, and if you are friend son Snapchat, you will be able to see that person’s ”Snapchat score,” or the total number of sent and received snaps. If you can’t see their Snapchat score, it can be an indication that they have removed you from their friend list.