Are you struggling with getting influencers to respond to your outreach messages?

Are you afraid they won’t respond when you contact them?

Is it frustrating when you contact countless social media influencers about a potential partnership and no-one responds?

I know the feeling. It’s bot time-consuming and tiresome.

You’ve identified suitable influencers for your campaign, you’ve mass-emailed them, but still no response. Now what?

Just like all other aspects of influencer marketing – such as influencer identification, campaign planning, and evaluation, having a plan and strategy of how you’re going to reach out to the influencers is essential. This is because having one will save you a ton of time and energy.

If you don’t have a strategy and reach out to influencers in the wrong way, you’ll harm your influencer relationships, brand reputation and chances of working with individuals who might be highly beneficial for you.

Let’s look at the 6 Common Influencer Marketing Outreach Mistakes You Can Avoid, in order to understand what you might be doing wrong with your influencer outreach – and how you can save a ton of time and energy.

1. Reaching out to the wrong influencers

This is a big mistake that can be fixed with an easy solution.

But in order to do so, you need to be aware of the mistake first.

I’ve spoken about the importance of working with highly targeted influencers, who align with your brand’s values, and these two things are very well integrated.

The first reason why reaching out to the wrong influencer is a big mistake is because it will generate poor results if and when you launch the campaign.

If the influencer doesn’t have an audience which fits in the description of your target audience, they won’t be interested in what you have to offer.

Secondly, and this has more to do with the outreach and the response you’ll get. Most influencers take partnerships with brands very seriously and only work with brands they genuinely believe in. That’s why, if you are reaching out to influencers who aren’t really relevant to your brand, chances are: they’ll say no.

This is a very accurate quote.

If you are reaching out to influencers who clearly doesn’t align with your business just because “they look popular” or “they have plenty of followers”, all you’re doing is showing that you haven’t done your research, and it will send out signals that you really don’t care about them.

As a result, they won’t care about you.

Let’s look at an example of an influencer outreach that went horribly wrong because the brand didn’t do enough homework about the influencer: 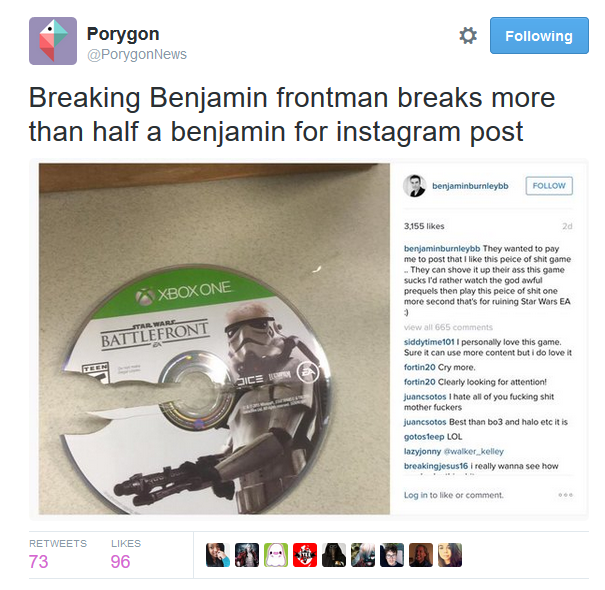 But not quite in the way EA hoped for.

Instead, as a result of EA reaching out to a non-fan of the game, hoping for him to promote it, he shared a post on Instagram telling everyone how bad the game was.

This is something you don’t want to witness happening to your brand so do your research. Even better if you can approach influencers who you know are already using your products and are fans of your brand.

2. Not reaching out on the right platform

There are many ways in which you can reach out to influencers, but email always seems to win.

It is more professional, and it makes it easier for both you and the influencer to keep track of your past conversations.

Almost all influencers have an email.

Dare I say it, all real influencers have an email, and if they’ve made it public, for example by adding it in their profile bio, they want you to use it!

Sure, you can reach out to influencers via social channels, for example on private messages, however, considering the fact that most influencers are constantly bombarded with notifications and messages on social media, there’s a chance they’ll miss out on your message.

Also, many influencers turn off their notifications due to the huge amount they’re receiving, so getting a response might take a while if they’re not checking their messages regularly.

This is bad, really bad in influencer outreach.

It proves that you are sending out mass-emails.

If the influencer doesn’t feel unique and just a part of your spam email list, there’s a big chance they’ll ignore your message.

Many influencers get pitch emails every single day so you can expect them to have become experts at distinguishing mass-emails.

The worst pitch emails you can send are those that don’t even include their name at the beginning of the email. This means making it possible for them to recognize your message as a mass-email in the first word.

They say the first impression is everything, but come on, screwing up on the first word?

What to do instead

To make the message personal, and to show that you’ve taken your time to study their profile and written the message, include lots of personal detail (but don’t go stalker).

Include their name, mention something they do well, in second thought, why not link to a post you thought was especially good?

4. Not presenting the benefits

The changes you have to make in your text to change it from one to another are small, but they make a huge difference.

Nobody wants to be approached by someone they don’t know and do a favor for them. That’s why you clearly have to state the benefits for them.

Let’s look at the differences of two messages you can write:

Which of these two do you think will be more appealing to the influencer? Obviously, the last one, because the first message is practically sounding like you are begging without giving them anything in return

5. Not cutting to the point

Influencers are smart and experienced people. They know a pitch email when they see it.

Often times, they’ll be able to distinguish one in the first few paragraphs, but surprisingly, the email doesn’t explicitly say that it’s a pitch until far down the email.

Doing this is bad for two reasons.

If you just keep rambling on in your email about how great the influencer is, how you love their posts etc., eventually, what you’re saying will lose credibility. If you are doing this together with sending emails that can be perceived as mass-sent emails without any personalization, it will lose credibility even further.

Lastly, influencers are busy people. Don’t waste their time. If your email takes too long to cut to the point, there’s a chance they’ll skip reading it.

Here are some things not to do when sending out emails that might help you make your message shorter:

There’s a fine line between being annoying and spammy, and being

I often have marketers tell me how influencers don’t respond to them, so I ask what they’ve written. Almost all the time, they’ve written something like “Let us know if you’re interested” at the end of the message.

I say, well, there you have it.

Well, the influencer is clearly not interested in your offer because your email explicitly told them to email back IF they were interested, so obviously, they’re not.

That’s when things get clearer for them.

After all, the influencer does what they ask for.

The solution is providing them with a better deal that they’ll accept.

Or, they might just not find the brand or products suitable for them.

If you don’t write this at the end of your email, but still don’t get a reply back from the influencer, a follow-up email is well in place. Sometimes, they’ve just forgotten about your email, it has ended up in spam, or, they just didn’t get it.

If you don’t get a response, one follow-up email is essential, but the time of which is sent is also important.

You should let at least 24 hours pass from the initial email was sent, but preferably, you should send a reminder after a few days. Some influencers just don’t have the time to respond within 24 hours, or might not have access to the internet that day.

If you don’t get a response after that, you can send an email some week later.

I usually get back to influencers that I’ve emailed weeks, or even months back that I haven’t heard for a long time. A lot of the times, they’ve just been busy and forgotten about it.

When reaching out to an influencer, make sure that you offer them a good deal. There are often two reasons to why the influencer doesn’t respond or respond that they aren’t interested. And oftentimes, the deal and offer you give to them is often the first reason.

The second reason is that your brand simply isn’t a good fit for them. Because influencers see it as their duty to guide their followers, influencers are very carefully with the brands they work with.