When choosing influencers to partner with, it’s important that you examine their accounts very carefully.

Many marketers make the deadly mistake to only look at the follower count that the influencers has and then think that is the total amount of people they will reach. This is of course not the reality. Due to social media algorithms and the competition between accounts of ending up in people’s feeds, you’re only going to reach a portion of your total followers on social media, or, in the case of influencer marketing, the influencer is only going to reach a portion of their followers.

The issue is however that it’s not that simple.

If you want to run a successful social media influencer marketing campaign, you have to go considerably more in-depth to see how influential the influencer really is and what impact they have on their following. It’s simply not enough to look at their follower count.

Today, it is easier than ever to buy fake followers and build an image of popularity and influence, while in reality, it is all just fake.

This creates a problem for marketers looking to partner with influencers because you not only have to look at the follower count and compare that with how many people they actually reach with their posts, you also have to factor in whether or not their followers are fake and bought.

If this is the case, partnering with fake influencers can be a costly mistake. As a business, you’re paying influencers to promote your products, but have in mind that fake followers are nothing but bots – empty shells, and these can never be convinced to become customers of you, no matter how hard you try. In other words, partnering with a fake influencer means throwing your money in the trash.

And while on the surface it may look like the campaign was a success, you have to be careful with only looking at vanity metrics such as likes and followers when evaluating results. While these metrics can be helpful, evaluating a campaign should go much more in-depth than that. 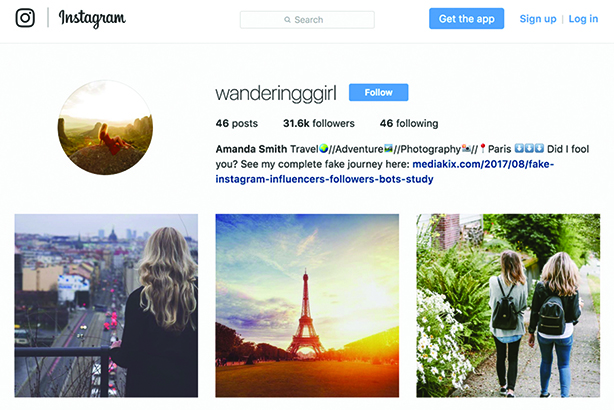 Because of the problem that fake followers and fake popularity causes for marketers, I’ll, therefore, provide you with the key aspects you need to take into consideration when choosing an influencer and how you can spot if an influencer has faked their popularity or whether they have the power to make a true impact on people.

How to spot if an influencer is fake

Commonly, marketers only look at the vanity metrics of an influencer before reaching out to them. If you’re one of those, there’s a risk that you’ll end up partnering with an influencer who has faked their influence by partly or fully buying fake followers and fake engagement. The vanity metrics are easy to manipulate, and this is why you want to look beyond these as the will only give you a vague idea of the results the influencer has the potential to generate.

There are plenty of resources available to make you look like you have devoted followers. If you look at the App Store, you’ll find countless apps that give you likes, followers, comments and views. Also known as fake followers and bots because they are in reality just bots that will never buy anything from your company.

In fact, fake followers won’t even help you increase your brand recognition because they aren’t actually real people.

How to spot fake influencers: look at their comments

The best method of finding true engagement is diving into their comments. It’s usually quite easy to identify fake comments when you know what to look for.

Normally, when you buy fake comments, you write the comments that you want the fake accounts to leave. As such, you’ll often see very generic and uplifting comments that are positive but don’t really say anything about the post itself. This is something that you want to be careful with for two reasons:

The first is that it can reveal a fake influencer, and the second is that it can be an indication that the followers aren’t truly impacted by the content the influencer shares. Now, it’s important that you take this with a grain of salt, because often times, you’ll see uplifting and generic comments left by real people on real influencers’ posts as well, but if the comment section only consists of this type comments, it may be worth investigating a little more carefully.

The bottom line for comments is that if they are genuine, they often say something about the posted photo. But as mentioned, even if they are real, they can often be generic and so if you are unsure, you can investigate the generic and uplifting comments further.

You can do this by researching the accounts of which have left these comments.

Go through the accounts of the people who have left these. It’s often quite easy to tell a fake account on social media. If you’re using Instagram, you can read an in-depth guide on how to spot fake accounts on Instagram.

Fake accounts are created on Instagram to sell as followers and to use to sell likes and comments. As a result, fake accounts tend to follow a ton of accounts. This is often done to make the account more real as well. Normally, fake accounts follow a few thousand people, all the way up to the max limit which is 7500.

3. How does their bio look?

The bio is often the most obvious tell of a fake account. Often times, the bio is not filled in at all, in other cases, the bio just has something that not many real people would write.

4. How many followers do they have?

Often times, fake accounts don’t bother to share posts. If they do, they have normally shared less than 10 posts, and if they have a public profile, you can almost instantly see that the account is fake. The images are often odd and not something that a real person would share on Instagram.

If several of these points are true, chances are, the comments have been left by a fake account.

Fake accounts often follow regular accounts in order to look more real, and so this means that even real accounts will have some accounts following them which are fake.

Top indicators that an influencer buys fake comments are:

If you see things such as the things mentioned above, the influencer might be fake but not necessarily.

To really be sure, you have to take a look at several posts that have been posted during different times in order to notice a pattern.

If you notice a pattern, then the influence is most likely fake and then you have to take that into consideration when deciding whether to work with them or not.

Do have in mind that just because some of the comments/followers/likes are fake doesn’t mean all of them are.

These types of influencers can still have some sort of influence but it’s important that you are aware of them, and in that case, the influencer should be priced accordingly.

The best way to spot if an influencer is fake is to look at their followers versus engagement level.

This is where diving deeper down into their comment can help you get a better understanding of whether or not your suspicions were correct.