Why You Shouldn’t Send Automated Messages on Social Media

I’ve seen it too many times.

And I bet you have too.

Or even worse, maybe you have sent out automated private messages yourself?

Automated messages that are sent immediately when you start following someone. I’ve seen all kinds, however, the principle of them is almost always the same.

They almost always ask you for something.

If you’re a marketer – huge mistake.

In this article, I’ll explain, and go more into detail into this matter.

Why You Shouldn’t Send Automated Messages on Social Media

First off, we need to identify why sending automated messages on social media is a bad idea and understand why people are doing it.

Automated messages on social media are almost always sent from an account when you start to follow them if they have connected an automated messenger to their account. There are also regular bots who comment on your post etc. but since the bigger issue is when people send automated messages, we’ll take on that problem first.

Okay, so what’s the problem with sending automated messages?

Well, first of all, as mentioned above, automated messages are almost always asking for something.

In the book “Jab Jab Jab Right Hook” written by entrepreneur Gary Vaynerchuk, you can read about the importance of giving, giving, giving, then asking. What you’re doing when you send an automated message is asking for a favor.

Here are some examples of common automated messages on social media: 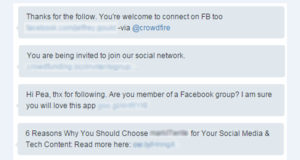 Can you see what they have in common?

Yep. they’re all asking for something without giving anything in return.

The person who decides to follow you and then gets your automated message don’t owe you anything.

2. In the second message, they’re asking the follower to follow their social network (a favor that is sugar-coated to sound good)

3. In the third message, they’re asking to join their Facebook group and check out the app (two favors in one message)

4. In the fourth message, they’re asking the follower to read their article (asking for a favor)

Now that we’ve identified the issue, we need to understand why automated messaging can be harmful to you.

This means that the first interaction people will have with you is listening to you asking for a favor and marketing something. Not really a great welcome.

Secondly, automated messages are seen as super spammy. Everyone can spot an automated message from miles away. If you’re going to send messages, do them manually, and even then, you shouldn’t promote anything.

What if you would promote your Facebook the second you shake someone’s hand? Not recommended.

The point here is that there’s nothing that beats human interaction.

If you write a personal message by your own to someone, there’s a big chance they will get happy and feel like they’re being taken great care of on your page, therefore continuing to follow your page. Secondly, a genuine message is the beginning of building valuable relationships with your audience and get loyal customers in the long run.

However, by sending automated messages, you’re almost doing the opposite.

Because automated messages often are extremely easy to spot, they won’t have as good of an effect as personal messages. In fact, there’s a big chance they will have a negative effect.

Just recently, I read a discussion on a forum where people said what they do if they receive an automated message on social media. The answers were almost all the same – unfollow.

So while you hope to get more from the people who start following you, you might actually end up losing it all.