Social media should be a natural part of every brands marketing strategy in order to engage with their audience, build their brand and respond quickly to negative feedback.

CEOs should also realise the importance of being active on social media as it has many advantages. Firstly, it helps build trust and lets customers engage with your brand on a completely new level and secondly, in the long run, it people are more likely to buy from companies where the CEO is active on social media. The reason to this is that consumers are reporting that they tend to trust brands more if they get to speak to the CEO directly.

There are many statistics on consumer behaviour that should make you consider engaging on social media as a CEO, or convince your CEO to start using it.

There is no doubt that engaging on social media as a CEO can generate tremendous results so lets go more into detail on how you can do just that.

How CEOs Should Use Social Media

1. Monitor what people are saying about your brand

CEOs should proactively invest time in staying-up-to date with what the market is saying about their brands.

Thankfully, with social media this isn’t a big of a challenge. A common way of doing this is by setting up social media and forum accounts. Large corporates are already doing this so why shouldn’t you? Places where the brand can listen to their customers’. This does of course not only include complaints but also tips for improvement, messages of appreciation and questions.

The location where these types of interactions takes places are often referred to as “social media listening rooms”.  An example is Coca-Cola. Coca-Cola has set up so-called “war rooms” where they acknowledge complaints, find solutions to them and engage with the customers who addresses issues. 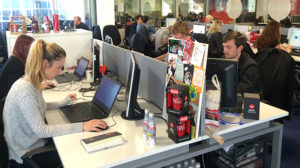 CEOs can efficiently do this as well. If a disappointed or angry customer addresses a complaint and gets a response from the CEO of the brand, it sends out signals that the brand is taking their complaint very seriously. In addition, people also tend to feel more satisfied and less “aggressive” after they’ve spoken to someone who is in charge.

A lot of things are being said on social media and you can learn a lot by simply listening to what your customers are saying on there. We have also seen a trend where brands are transferring to these types of “customer surveys” instead of emailing them out and asking for their customers’ opinions simply because they often are more accurate, less time-consuming and can be answered in a more efficient way.

Bad press on social media can be damaging and even fatal for businesses. Not long ago, we witnessed a social media storm against United Airlines when a traveler was dragged out of the plane when it was overbooked. People took it to social media to express their anger and the stock dropped as much as 6.3 percent when the event took place. Their Instagram was stormed with angry comments, most of them including the f-you emoji.

On top of that, the hashtag “boycott United” started trending and in writing moment, it has 4514 posts. This shows just how powerful social media is.

Although it’s more difficult to rebuild your reputation once it has been harmed, with social media it’s possible. Part of that is because you have the ability of analyzing what people are saying online and then take action from there – before a social media storm breaks out. In short, it’s a very effective way of being proactive when it comes to a harmed reputation.

Social media is a place with comments and expressions of every kind. Hate, love, questions and requests. It is therefore a place where you can meet your customers and talk to them in a way that is very valuable.

Social media, used correctly, can be an executive productivity tool, a global broadcast channel, a source of consumer and competitor Intel, and a PR vehicle.

Before the age of social media, getting customer opinion insights demanded professional focus groups and analysis. With social media, however, it’s a completely different ball game. Social media now gives CEOs and brands instant access to what their customers are thinking and doing. Best of all – it takes minimal time and effort.

After just minutes of scrolling through social media, you have a very good understanding of how your customers are feeling, in real-time.

Today, building trust with customers is more than just a “customer service line”. It requires a real, human face and genuine interactions. And what’s better than the very own CEO of the company to do this?

On social media, you can build trust both efficiently and at scale while not spending too much time.

When CEOs post on social media, nearly 70% of senior professionals report that it makes the company a more attractive place to work. For brands, social media is a way to make the CEO more equal to the employees so, in that sense, social media does not only build trust between customers and brand.

As we touched upon previously, the ROI of customer engagement in terms of time by the CEO is huge. Without having to call for a meeting or presentation, the brand can build a long-lasting trust with both customers and employees.

CEOs can use social media to build hype and excitement while at the same time spreading brand awareness about their brand with the help of social media. A person that has been able to achieve this is Jack Dorsey, CEO of both Twitter and Square. He uses Twitter, the company he co-founded to share the latest news on his personal Twitter account.

Because people feel more closely connected with a real person and not a brand’s logo, as a CEO, your words on social media can have a huge impact.

By letting people know about something you’re really passionate about (your company), the engagement rate will be much higher and the hype-building will be much greater than if the company is doing it (where people normally have no clue who actually posted the content).

Showing appreciation and gratitude towards both your employees and customers is important for CEOs and leaders. In addition, on social media it’s free. It’s difficult to thank everyone personally so social media works as an excellent tool for doing this. Add a bit of personal touch and write a message from your heart, expressing your thankfulness to the ones that have supported your business.

Not only does this increase the respect towards you as a CEO but it also shows what your brand is all about.

Apple CEO Tim Cook is an expert when it comes to this. If take a look at his Twitter account, you’ll soon see that a lot of the content he is posting is including thank-you messages to Apple’s employees and everyone affiliate with the business. As a CEO, you should definitely consider doing this as well because it strengthens your popularity and credibility tremendously.