Developing powerful relationships is the key to having fruitful contacts and having more success with what you do? It is also one of the most important skills in both business and life.

You should always strive towards building relationships that can impact your life or business in a powerful way.

A lot of people are afraid of making the first step and most often, it is the fear of rejection that is holding them back.

It is fully understandable that people have a fear of rejection by after all, influencers are just like you and me, just with  some fans and people following them.

It is very important that you aren’t seeing these connections as people you can take advantage of because a fruitful relationship is about give and take and that is what a powerful connection is all about.

A strong relationship with an influencer is about building genuine relationships where both parts are valuable to each other.

Erase the idea of connecting with influencers in order to gain something then move on and replace it with the idea of long-term relationships that is fruitful and valuable for both ends.

In this article, I’ll be providing you with a you a step-by-step guide on how you can connect with influencers on social media. 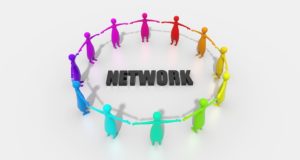 1. Give value without asking for anything in return

This is the single most important thing if you want to leave an impact on large influencers.

By doing something for a large influencer without asking for anything in return, you are gaining instant trust by the influencer. Not only that, when you are finally going to ask for something, the chances of a yes is dramatically increased.

It can be anything from helping them correct a spelling error in their caption to making a video of their life story and everything in between.

The most important thing is that you are doing something for them that leaves an impact. The chances are that if you correct a spelling error, they will be thankful but quickly forget it.

If you on the other hand make a long documentary/video of their life, it will have a much bigger impact on them.

Therefore, the bigger the impact your deed makes, the bigger are the chances of building a long-term relationship because giving something out of value without asking for anything in return is the best way to take the first step of approaching an influencer.

Think about the amount of messages people with a big influence are receiving every single day. It is hard to stand out from the crowd but certainly not impossible.

If everybody is trying to get a hold of the influencer and get their voice hear through Instagram Direct Message for example, you need to find a different source of contact where there is less noise and you can stand out more.

If you are contacting the influencer through a source where they are receiving tons of messages, the chances are that your message won’t be read and even if it gets read, it won’t get a reply because the influencer has a hundred more messages, where a lot of them looks just like yours.

3. Make a name for yourself before contacting them

This can contribute a lot when it comes to building relationships with influencers.

Most people who are reaching out to influencers are just cold-messaging them, which means that they contact them without having had any previous connection with them.

Sometimes cold-messaging can work but in these cases, the chances are – it won’t.

Before you contact the influencer, try interacting with them. Not once, not twice but tens of times over a longer period.

If you are engaging with the influencer once, the chances are that they will forget you quite immediately. If you interact with them twice, they will probably recognise your name but not think about it much more.

If you engage with them 20 times, they will see you as a loyal follower and a valuable supporter of them. You simply build a name for yourself.

Having done this is extremely valuable when finally contacting them because the odds of getting a response is considerably bigger.

The reason to this is because they’re starting to value you and appreciate your support. The least they can do then is answer your message.

4. Engage with them on platforms they are active on

All influencers spend their time on different platforms differently.

When you are going to begin build that name for yourself, it can be good to identify the platforms the influencer are most active on and where they are engaging with their fans and supporters.

A study by emarketer found that influencers spend most time on Instagram and Facebook. Of course, this does not mean that you won’t find influencers on other platforms, but it can be something to have in consideration.

This is what emarketer says “It’s not surprising that Facebook and Instagram were considered to be among the best social media platforms for influencer marketing, especially given that most influencers use photo and video content when marketing on behalf of brands. ”

There are several ways you can identify the platforms on but because your main objective is to engage with them, you want to look for places where they are responding to comments and answering by their followers.

If they have a blog, this is a great place to start.

Take a look at their comment section. Are they responding to the comments that are being posted? If so, targeting their blog comments can be a great place to start engaging with them.

Take a look at the comment sections of their social media pages. Are they responding to comments on their posts? If so, this is a also a great place to start engaging on.

Another great place is Twitter and engaging with the influencer through Tweets. If people who mention the influencer in their Tweets gets a response from them, maybe you want to start considering doing the same as this is an excellent way of making them aware of you and your name.

As mentioned earlier, many influencer has a blog (that you normally can find as a link in their social media bios). Most influencers that has a blog also have a newsletter sign up.

It is common that you get an email from them not long after you have signed up to the newsletter.

A fun way to start engaging with them is by simply responding to that email. A lot of bloggers/influencers enjoy getting responses on their newsletters as this helps them understand their audience better.

First of all, this is a unique and fun way to connect with the influencer as not many people are doing this. Secondly, your feedback all of a sudden becomes valuable to them as they start to take your feedback into consideration.

This makes you a valuable resource to them, making the odds of building connections with them more likely.

Connections are extremely important but creating the right relationships is the key to success in life and business.

Always make sure you are bringing value to the influencer when contacting them and don’t ask for anything in return.

If you want to find leading influencers in your niche, take a look at the Veloce Network influencer directory where you can filter through thousands of influencers in seconds!