Nowadays there is a huge amount of money involved in Soccer, with billions involved in sponsorship, wages, and the technology behind every game. The top soccer earners in the world, Lionel Messi, of F.C. Barcelona and Cristiano Ronaldo, of Juventus, earn around $667,000 per week, and $657,000 per week respectively. When broken down, this is a staggering amount of money, and when combined with sponsorship deals and endorsements from global powerhouses such as Adidas and Nike, their total take will surpass $100million each per annum. Whilst these are the two highest earners in soccer currently, the numbers are only expected to rise within the coming years with more and more money being introduced to soccer every year, through inflated TV deals, and matchday ticket prices.

As research from Findbettingsites shows, some of the other top earners in soccer, such as Antoinne Griezzman, of Athletico Madrid, and Luis Suarez of F.C. Barcelona, earn slightly less than the aforementioned. This is largely due to the fact that Cristiano Ronaldo and Lionel Messi are widely considered to be two of the best players in the world, as well as two of the most marketable athletes in the world, and to acquire their services requires large sums of money. However, with that being said Griezzman and co. are still earning an astonishing amount of money. After Antoinne Griezzman won the World Cup in 2018 his demand skyrocketed, as was to be expected; as a result of this, he was able to leverage a new contract, reportedly worth $444,544 per week.

In recent years, there appears to have been a shift away from the traditional story, being European teams dominating global soccer financially; with teams in the Chinese Super League investing large amounts of money to develop soccer in their country. Players such as Oscar, Hulk, Axel Witsel, and Graziano Pelle are all players who have made the switch from Europe to China, for large sums of money. Oscar, the top earner within the Chinese Super League, transferred from Chelsea F.C. in London, to Shanghai SIPG for around $69million, and is reportedly earning around $530,000 per week, with other players such as Hulk earning around $424,000 per week. These figures are extremely remarkable, considering China has never before been considered a large soccer-playing nation.

Overall the top soccer players generally earn in excess of $30million per year, which the best of the best breaking the $100million mark per annum. It has always been an extremely lucrative business and is only expected to continue with this upward trajectory of spending. 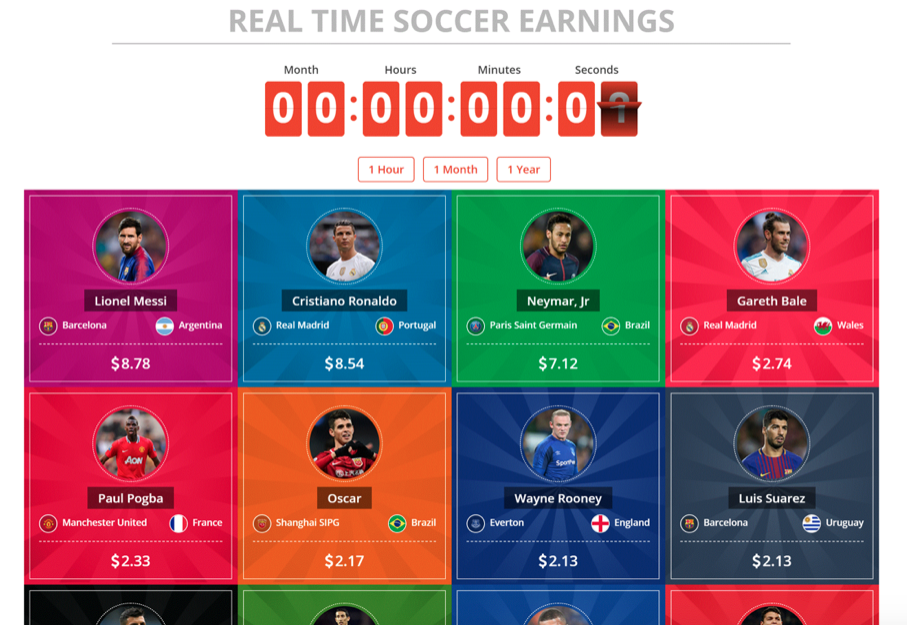