Predictions of Social Media In 2017!

2017 is here and that mean another year of social media use and possibly some new apps and features being released. However, some social media predictions for 2017 can be made. A lot of have happened in the world of social media during 2016.

The rise of Snapchat, Instagram´s new algorithm and the increased popularity for businesses to market on social media. With the observation that a lot has happened in the world of social media during 2016, we can assume that even greater things are going to happen in 2017. In this

In this article, however, we´ll be giving you our Predictions of Social Media In 2017!

Social media platforms are constantly changing and new ones are being introduced. For 2016, Instagram introduced algorithms to provide users with the best possible content and experience, however, this had some downsides as well that is believed to have further affections in 2017.

Firstly, algorithms are making it more difficult for brands and marketers to get organic visibility and many people´s engagement will continue to decrease. In the new year, the algorithms are expected to make the pages work even harder to reach the top spots of people´s feeds since that might be the only way to get seen in the new algorithm social media world.

However, for marketers, social media will be a challenge and opportunity and will mean a higher demand for being able to adapt to the constant changes and trends. With the decline of content marketing and instead a rise of new technologies for example VR and AR, marketers will be forced to find new strategies for be able to still be in the game.

VR and AR- Virtual reality and augmented reality are now built into most mainstream social networks and we can only guess that we probably will see a lot more of those features (and possibly apps) in 2017. 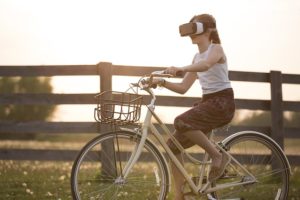 For brands and customer support, it will also mean a higher demand for quick replies between customer and company. The competition of good customer service and quick replies will get even harder thanks to social media and brands taking parts of their customer service there to be able to give quick replies and help.
2017 is also expected to be a further growth and popularity of Live Video. Platforms such as Facebook, Snapchat and now also Instagram has already made this an easy to use feature and we can surely expect to see new features within the “live streaming world”.

This was some of the Predictions of Social Media In 2017! What are yours? What other trends are you looking forward to in 2017 and what new technologies do you expect?